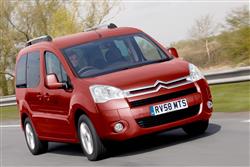 Citroen's Berlingo Multispace offers a lot of space and flexibility for the money, thinks June Neary

I must be honest and say that the 'van with windows' formula has never been one that has much appealed to me. However, you have to say that it's a cut-price way of providing many of the benefits of one of those Scenic-like family MPVs without the prohibitive cost. Whilst a Renault Scenic costs from nearly £22,000, the Citroen Berlingo Multispace featured here can be yours from under £17,000 - quite a difference if you're buying on a family budget. When this car first arrived in the UK, it was a very basic thing indeed, but the launch of the second generation version in 2008 ratcheted up the quality factor quite a few notches. Early in 2012, this MK2 model was facelifted, improved and made more efficient and ever since, Citroen has been further improving it. This demanded re-evaluation of the car on my part and in general, I came away impressed.

The first thing you notice about this Citroen after living with it for a little is its versatility. Here's an example: we used it for a picnic and it started to rain, whereupon we were able to take shelter beneath the raised tailgate. At over 4ft wide, this doubles up as a large umbrella and raises high enough for party of six footers to stand beneath it. To complete the lifestyle picture, I expected the seats to come out but alas, they don't unless you pay extra. Another advantage of the LCV-inspired shape is that the van design's high roofline means enough headroom for the most vertically challenged passengers (up to 6ft 6in). It also, not surprisingly for a vehicle of this type, means a huge amount of luggage space - more indeed than you'd find in a large executive estate car. There's 675 litres of space with the rear seats up and an enormous 3,000 litres with them folded. So yes, mountain bikes, scuba gear and surfboards can all be accommodated with ease. Loading heavy items in is aided by a reinforced rear bumper which can withstand up to 150kgs. Nice touches in the cargo area include tie-down hooks, a retractable load cover to hide luggage from prying eyes and a removable rubber mat, which can be hosed down after carrying muddy loads. Multiplex wiring technology provides such niceties as 'follow me home' headlights, and rear wipers that switch on automatically if reverse gear is selected whilst the front wipers are on. Air conditioning is included with the standard package across the range - which is just as well. After all, with 40 square feet of glass area, there's the potential to create your very own greenhouse when the sun comes out. The windows are tinted too and, in the front, electrically operated. Other standard features worthy of note include remote control central locking, heated door mirrors for frosty mornings, a transponder immobiliser and power assistance for the height-adjustable steering wheel which incorporates an airbag. Neat touches abound around the cabin, with no fewer than 15 different storage areas that can accommodate anything from large bottles to small change. Above the front seats, a massive full-width overhead shelf is designed for maps and newspapers, whilst expandable pockets above and below the rear seat side windows provide handy storage for odds and ends. In addition, there are twin gloveboxes, incorporating cup and penholders. The dashboard looks a lot classier on the latest car than in early models with a large multi function display letting you know what's going on.

Bearing in mind this car's commercial ancestry, I was expecting a less than exhilarating driving experience - but it wasn't too bad. Citroen offer four different units: an old-tech 95bhp 1.6-litre VTi petrol, a much more modern 1.2-litre Pure Tech petrol with 110bhp and two versions of the 1.6-litre BlueHDi diesel with either 100 or 120bhp. All models feature compliant rear suspension to make them feel less like the van this car is based on. The result isn't something you'll be finding excuses to drive, but a vehicle that doesn't handle too badly either, with surprisingly little roll considering the height of the vehicle.

Prices start at around £16,500, rising to around £21,000 for the top 1.6-litre BlueHDi model. Opt for niceties like sat nav and the neat glass roof, plus hi-tech safety kit and you can bump the price up quite significantly.

Yes. To be honest, I'd want to take a careful look at one of these kind of vehicles before investing so much in a mini-MPV like a Scenic or a Vauxhall Zafira Tourer. They make that much sense.