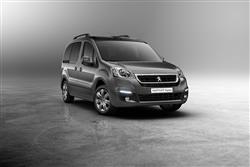 If you're thinking of a small, spacious People Carrier, you're probaby not thinking of Peugeot's Partner Tepee. As you can probably guess from a glance, it's based on the brand's Partner van, but it's been smartened up quite a bit in its transition from LCV guise. Inside there's multi-media connectivity and glass roof cleverness. And there's technology too, including an all-electric version if you want it. In other words, there's more to this French contender than meets the eye.

Go back a few years and van-based passenger vehicles were, and there's no real way to gild this one, a bit rough. You bought one because you needed stacks of space and you didn't have a lot of money. Or alternatively, because your kids would destroy anything that wasn't built in the back like a police detention vehicle. These days, things have changed. Not only have commercial vehicles become a lot slicker, but there's been a gradual merging between conventional MPVs and van-based people carriers. There's no longer a yawning gulf in look and feel. Well, that's the case for most manufacturers anyway. For Peugeot, that's a trickier gap to bridge, largely because the interior build quality of their passenger cars has raced ahead massively within the last five years. In order to try to keep up, their van-based MPV, the Peugeot Partner Tepee, has been given a scrub up in recent times and now can even be ordered wth full battery power if you really want to strut your green credentials.

The Partner Tepee weighs in with no fewer than four Euro6-compliant engines. The petrol engines open with a 98bhp 1.6-litre VTi unit with a five-speed manual transmission, but it's better to try and stretch to the more modern 110bhp 1.2-litre three cylinder PureTech powerplant. From there on in it's all diesel with the choice of 100 or 120bhp versions of the brand's 1.6-litre BlueHDi engine. The 100bhp 1.6 diesel is also available with a six-speed ETG 'automatic' gearbox, while the top 120bhp version gets a six-speed manual box. The alternative to all of this is an all-electric variant with a 100 mile operating range. There's also another innovation that will be of interest to UK buyers, namely Grip Control. This is a system that provides enhanced traction on roads or tracks with low grip surfaces, allowing the vehicle to continue to make progress in a situation where a normal two-wheel drive vehicle would struggle. It's combined with a generous ground clearance of 15cm with Mud & Snow tyres. It adapts to the conditions encountered by acting on the front driving wheels. At any time, the driver can choose to allow the system to operate automatically in Standard mode, or can switch it into 'Snow', 'Off-road', 'Sand', or 'ESP Off' modes by using a dial on the dash centre panel.

Design-wise, this Partner Tepee looks a lot smarter than you might expect a converted van to be, thanks to a range of cosmetic modifications introduced back in 2015 that included the usual facelift staples of a revised grille, bumper and headlights. Inside, storage solutions abound under every flap and in every crevice with more ingenious inclusions as you ascend the range. A classy grey finish runs across the dash and is mirrored on several interior features, while high quality NeoSpa seat trim is used on trim level three and the top 'Outdoor' version. As before, you can get this car with either five or seven seats. All second and third row chairs are completely removable. Take them all out (not an easy task if you're bad of back) and your Partner Tepee will present you with a completely flat floor and a load volume of between 675 and 3,000-litres. A huge tailgate makes loading easy.

There are two trim levels - 'Active' and 'Outdoor' - and, as ever, the choice of either five or seven-seat layouts. Prices sit in the £16,000 to £21,000 bracket. The Partner Tepee comes with some interesting equipment options, including a Zenith sunroof. This features four dark tinted glass panels, plus three extra air vents are provided to prevent the Tepee's interior becoming a greenhouse on summer. You also get 94-litres of additional storage space in the roof courtesy of an overhead storage bin at the front, storage spaces either side of the centre roof console and at the rear, a compartment accessible both from the cabin and the boot. There's also an updated telematic system on upper spec models with a 7'' colour touchscreen in the middle of the dashboard. This integrates a trip computer, an AM/FM or DAB radio and 'Jukebox' music files on an integral hard disk. Plus of course it supports hands-free telephone and navigation. Navigation includes the display of speed limits and traffic information with mapping for Europe. There's also the provision of a reversing camera to make reversing what is a fairly chunky vehicle into a space a whole lot easier. Peugeot also offers Active City Brake technology, a set-up that will scan the road ahead for potential collision hazards as you drive at urban speed. If one is detected, you'll be warned. If you don't respond - or aren't able to - the brakes will seamlessly be applied to decrease the severity of any resulting accident.

Peugeot has worked hard to drive down tailpipe emissions on the Partner Tepee and to good effect. No variant manages to dip under 100g/km, but the entry-level 100bhp diesel engine manages 67.3mpg on the combined ycle and 109g/km, while the PureTech 110 petrol variant returns 55.4mpg and 119g/km. The base 1.6 VTi petrol engine isn't quite so clever, as you probably expected, good for only 44.1mpg and 148g/km. Drive either of the diesel models with a modicum of restraint and you'll be able to get better than 50mpg from them. Of course, the cheapest form of Partner Tepee motoring would be a guise in which no fuel would be required at all. The full-Electric variant makes that a possibility, claiming a 100 mile range from a full battery charge. What else? Well, the three-year warranty isn't the most generous in the business, but overall running costs will be very low with a combination of presentable residual values, low insurance premiums and very modest spares and servicing costs.

Commercial-based MPVs have genuinely come of age. The Peugeot Partner Tepee, and indeed its sister vehicle the Citroen Berlingo Multispace, is proof positive of that. But as these vehicles have become more sophisticated, the prices have quietly crept up. Also, the way we perceive and use such cars is subtly different. This Partner Tepee can these days be had with a slick multimedia system and a ritzy glass roof. It's no longer the sort of thing you'd chuck a couple of muddy mountain bikes into the back of without worrying about the upholstery. So has the Peugeot lost its way in that regard? Not really. The Partner Tepee's available in a range of trim levels, with the French company looking to cater at the foot of the range to those who want something no-nonsense, while at the same time offering up-spec models to those who want car-like features but more space in the back. The bottom line is that this is still one of the most versatile vehicles that sensible money will buy.