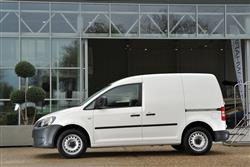 Volkswagen's third generation Caddy van always set out to offer a classier alternative to other spaciously compact LCVs. It was first launched in 2011, created as an update of the original MK2 model originally introduced in 2004. With two lengths to choose from and multi passenger Kombi or MPV-like 'Life' models, there's plenty of choice, no matter what your load. Here, we look at the post-2011 MK3 range as a used buy.

If you remember the Eighties and know your commercial vehicles, there's a chance that you might recall the first Volkswagen Caddy, a pick-up version of the brand's Mk1 Golf. Unfortunately for the Wolfsburg brand, pick-ups were not quite as popular then, leading to the European model's demise in the early Nineties. Seeing a hole in the range, Volkswagen brought back the Caddy name in 1996 with a little panel van spun off the platform used for their Polo supermini and SEAT's Ibiza. More specifically, it was an Ibiza from the front doors forwards, with a big metal box on the back. Volkswagen's next attempt at a Caddy though, in 2004, was a lot more thorough, with a purpose-built van spun off the Mk5 Golf platform. This gave the new model much more cargo space, more cohesive styling and much better road manners. It also gave van buyers something rivals couldn't offer - a much more premium feel to the cabin. In 2007, a long wheelbase Maxi variant was added to the range to sell alongside the standard panel van. This variant was 470mm longer, so load capacity was greatly increased, while passenger Caddy Maxi models could now carry up to seven. The '4MOTION' all wheel drive system became an option in 2008, while at the end of 2010, Volkswagen unveiled the heavily facelifted MK3 Caddy we're going to look at here, as rival manufacturers cottoned on to the brand's winning formula. Outside the styling was sharpened up with a far more imposing front end comprising of much larger upswept headlights, wider grille and simpler front bumper.

The Caddy rides on a derivative of the Mk5 Golf platform, albeit one that ditches that car's complex multi-link independent rear suspension. Instead, there's a much simpler and tougher beam axle that is better suited to the hard life many vans will lead and therefore the norm for most LCVs. Out back, the loading height is between 560 and 594mm, depending on model, with doors that are 1181mm in width and 1116mm in height. The standard panel van's load area length is 1781mm, meaning a single Euro pallet will go in but not much else. The Maxi version increases this to 2250mm, with volume increasing from 3.2 to 4.2m3. The standard model comes standard with a single sliding side door and half bulkhead behind the seats. The Maxi adds a full height bulkhead and twin side sliding doors. Both get a loadspace width of 1552mm, narrowing to 1172mm between the wheelarches. Although a 2.0 petrol engine with the ability to run on compressed natural gas was available, the overwhelming majority of Caddys sold have been diesels. Two sizes were offered for the version we're looking at here: a 1.6 TDI with either 75 or 102PS, or a 2.0 TDI with 110 or 140PS. '4MOTION' variants only received a 110PS version of the 1.6-litre unit. The styling still looks fresh today, making for an attractive little van, even with black bumpers and steel wheels. Plenty of buyers still decided to spruce things up, with optional metallic paint, alloy wheels and body coloured bumpers. Cabins are well made, with plenty of storage and also received improvement for 2011. There are three basic spec levels to look out for if you're restricting your search to post-2011 facelifted variants. 'Startline' trim comes with a radio/cd player with AUX-IN socket, a reach and rake adjustable steering wheel, a rubber load area floor covering and load lashing rings. 'Trendline'-spec adds a better stereo with Bluetooth connectivity, cruise control, electric windows, electric heated door mirrors, parking sensors, body coloured bumpers, mirrors and doorhandles plus wheel trims. Top 'Highline' trim gets air conditioning, a leather steering wheel, front foglights and alloy wheels. Some models you'll find will have been fitted with pricey extras like satellite navigation and a multi-function steering wheel. Others may have the 'BlueMotion Technology' pack fitted for extra efficiency. Those after the ultimate in economy should seek the stand-alone 'BlueMotion' model, which features further changes that push MPG up further.

The Caddy often tops lists for being the most reliable LCV out there, so you're mainly looking at condition and service history in seeking the best one out. For every Caddy that's spent the last few years having heavy items chucked carelessly into the back, they'll be another that's been cherished by someone who never troubled the maximum load capacity. Check the load bay for any deep marks or dents, along with the rest of the bodywork outside. If there's damage everywhere with burns or rips on the seats, then it's time to look elsewhere. Post-2011 models should have all service stamps in place from either a VW main dealer or at least a specialist. If any are missing, you'll have to wonder why.

The 1.6-litre 75PS diesel variant may be fine if you're not planning on carrying much weight, but bear in mind the glacial acceleration time of nearly 17 seconds to 62mph. This drops markedly to 12.2 seconds if you opt for the 102PS 1.6-litre variant while keeping combined cycle fuel economy at the same 49.6mpg. If you're looking specifically at post-2011 models fitted with the 'BlueMotion Technology' pack, the higher power 1.6-litre model is actually more frugal, returning 55.4mpg on the combined cycle, 2.1mpg better than the 75PS motor. Fans of efficiency should really look out for the stand-alone BlueMotion model however. This squeezes 61.4mpg out of the 102PS 1.6-litre TDI diesel, with no performance penalty. If you carry really heavy stuff or tow a trailer regularly, then the 2.0 litre 140PS TDI diesel is the engine for you. Speed freaks may appreciate the 10 second dash to 62mph but it's just an added bonus of the extra grunt. As you would expect given the extra 400cc under the bonnet, economy does drop (to a best of 50.4mpg on the combined cycle), but for some users it's a price worth paying, especially given the greater towing capacity of up to 1500kg for a braked trailer. Handling is sure-footed and better than a number of competitors, whilst still offering a comfortable ride. If ease of use is important to you, then Volkswagen's excellent dual clutch DSG automatic gearbox is worth seeking out. Unlike traditional autos, the DSG set-up comes with little-to-no efficiency penalty.

Although not the biggest or most efficient LCV out there, the third generation Caddy van has proved exceedingly popular with operators for years now. The 2011 model year updates made sure this popularity remained, keeping the model competitive against tough rivals like Citroen's Berlingo and Ford's Transit Connect. Load capacity isn't class-leading, but it'll be more than enough for the majority of users. And there's also the long wheelbase Maxi bodystyle as an option for those who need more space but don't want to trade up to a Transporter. Whatever your need is in buying a reliable small but spacious van, this one can probably deliver it. If you're looking for an LCV of this sort that can soak up abuse on a building site, make an impression as you drive down the road or confidently tackle a snowy journey in the middle of winter, there's a Caddy that should fit your needs. Add in a quality interior and decent road manners and you can see why business people like it. As a secondhand buy in this segment, it'd always be amongst our top choices.