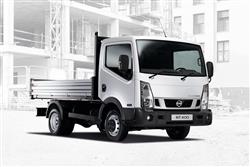 Nissan's NT400 is short on finesse but long on practicality. Steve Walker checks it out

It might be a little rough around the edges but you can't deny the Nissan NT400 is great at its job. An ultra-tight turning circle and good all-round visibility make it a dab hand at moving heavy loads into tight spaces. Likewise, the engine and gearbox can be found lacking on the open road but both are just what you need in the in the NT400's native urban environment.

There's something refreshing about a vehicle that bypasses the airy-fairy stuff that's increasingly prevalent in the modern automotive industry. Nissan's NT400 has always been a prime example, a complete stranger to soft-touch materials, integrated control systems and retro design concepts. It's built to do a demanding job and if it assaults your eardrums and puts your breakfast through the spin cycle in the process, you'll just have get over it. The latest model was designed to be easier to live with but you just know it's still going to be a tough customer at heart. The qualities that make a product excel at one thing often make it borderline useless at something else. In the same way that you wouldn't use your iPod to stir your tea in the morning, you wouldn't try to drive a Lamborghini Gallardo across a ploughed field. You can have a highly evolved piece of design that's beautifully fit for purpose but take it away from its area of specialisation and it may start to flounder. Like the Lamborghini, a vehicle created for the express purpose of looking sexy and going quickly, Nissan's NT400 is built for a clearly defined role. Use it for moving dirty and/or heavy cargo over short distances in areas where space is at a premium and there's little to beat it. In some other respects it can seem a little uncouth.

Power in the NT400 comes from one of two common-rail diesel powerplants. There are two engine outputs available - 130PS and 150PS. In all cases, power is directed to the rear wheels. The power outputs might look meagre on paper for a vehicle that can carry as much as 1,500kg but the NT400 isn't built for speed and its engines are tuned for torque. You get up to 350Nm pf pulling power and the torque curves are flat so the shove you need to get a fully-laden NT400 moving is on tap even at low revs. The engine is hard at work just below where you sit in the vehicle. It clatters and wheezes away in the background but noise levels aren't too bad at all. 1st and 2nd gears are very short to get you off the line and make sure the truck doesn't flounder on steep gradients but once you get the hang of it, you can spirit the NT400 along at quite a lick. It will lift an outside front wheel under hard cornering and you feel like you're going rather faster than you actually are with nothing but the windscreen in front of you but these factors can be put down as inbuilt safety features, encouraging hot shoe drivers to slow down a bit. The ride quality has improved on the NT400 in recent times thanksto revised independent front suspension, but don't get your hopes up. The experience on poor surfaces is now merely like riding a mechanical bull whereas the old model could have served as a training vehicle for those planning a crossing of the Southern Ocean by lilo. The rigid rear axle is partly to blame here but it does allow the NT400 to take those large payloads and the rear wheels put the engine's power down without any problems.

The first time you clamber up into an NT400, you find yourself with a lot to get used to. Many of the defining factors that make up the this Nissan's driving experience stem from its design as a forward control vehicle. A forward control vehicle is one with its steering rack positioned ahead of the front axle. This layout gives the NT400 a super-tight turning circle of 9.6m and positions the driver right at the front of the vehicle with an unrestricted view through the vast windscreen. This is great for easing the NT400 in and out of tricky situations but it also means that you're sitting on top of the axle and every imperfection in the road surface can seem like it's being transmitted through the heavy-duty suspension and straight up your spine. The NT400 is distinctive to look at with its flat front and those oddly tall light clusters. The dropside model we tested was very strongly built with robust catch mechanisms that allow any combination of side panels to be lowered for easier access when loading. The side indicators that stick out from the body on stalks were the only things around the exterior that seemed in any way vulnerable.

There's a wide range of models to choose from with short (2.5m), medium (2.9m) and long (3.4m) wheelbase versions available in chassis cab, dropside truck and tipper form. In addition to the standard single cab bodystyle, a six-seater double cab layout can be specified with the medium and long wheelbases. Standard equipment includes a driver's airbag, pretensioner seatbelts, a CD stereo and powered windows. Payload capacities range from 1,269kg in the short wheelbase tipper to 1,579 in the short wheelbase dropside model. The key alternatives if you want a vehicle with a similar blend of lugging power and manoeuvrability are Toyota's Dyna and Mitsubishi's Canter which is sold through Mercedes dealerships. Otherwise, buyers can look to open-backed versions of the leading panel vans which will be smoother and more refined on longer trips but won't be as nimble around town or as generally tough as an NT400.

The cabin is designed to be a sturdy working environment and it fills this role well. There are plenty of cubby holes for storage but they're all on the small side. You could fit reams of paperwork in the cabin but other than the area behind the middle seat, you'd be hard pushed to stow something the size of a thermos flask out of harm's way. The plastics used are generally hard and tough but some of the extraneous trim seems a shade flimsy - on pulling out the ashtray the best part of the dashboard threatened to come with it. Space is generous and you could fit three across the NT400's cab without too much trouble. There's also loads of headroom and the large glass area gives an airy feel to the interior. On the downside, this gives the heater a tough job to clear the windows when they get steamed or iced-up. All NT400 models come with a three-year/60,000-mile warranty which is supplemented by three years of paintwork cover and six years of anti-corrosion cover. The service intervals are set at 18,000 miles.

The Nissan NT400 is pitched at a very specific market. Many operators who use this kind of vehicle would never consider anything else, so well suited is it to its role, but others just won't get it at all. The big benefits are the manoeuvrability that stems from its 9.6m turning circle, its tough mechanicals and its big payload capacities. The penalties you pay for the NT400's undoubted prowess as an urban delivery vehicle are its rough ride and lack of creature comforts. Businesses looking for a commercial vehicle that's a bit of an all-rounder should avoid the Nissan Cabstar but if your company needs to move big, dirty loads around towns and cities, there's nothing better. The NT400 takes the view that excelling in one area has got to be better than being mediocre in a host of others. In this instance, it might well be right.