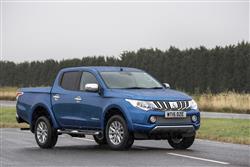 ONE L OF A PICK-UP

As you probably already appreciate, pick-up trucks are not the most feminine of vehicles. Their popularity is based on a rough 'n' ready image, a chunkily imposing road presence and the theoretical ability to tackle some seriously arduous terrain. Everything on a modern pick-up seems to be oversize, chrome-plated or both. Then you have the fact that they're officially classed as commercial vehicles not cars. So why would anyone want by a pick-up truck to serve as family transportation? It's a question that I asked myself more than once before taking delivery of Mitsubishi's L200 Series 5 model. I was expecting something that was seriously rough around the edges, a handful to drive and uncouth in the extreme. I have to tell you, however, that the vehicle which turned up outside my house proved not to be lumbering beast that I had marked it down as. In the past, my less than favourable pick-up preconceptions may not have been confounded quite so thoroughly, but this L200 Series 5 is one of the latest breed of pick-ups. These models retain the snarling outward appearance while incorporating a softer side beneath. You can safely think of the L200 as a family 4x4 featuring an open loadbay on the back without being too far from the truth.

This L200's great strength is its versatility. This is a commercial vehicle but Mitsubishi have carefully devised a range of models that can cater for the full range of requirements from business to domestic. The versions that family buyers will be interested in are the double cabs - models with a full row of seats behind the driver and passenger - and, more specifically, the higher specification double cabs. The version I tested was called the Barbarian, an L200 derivative that fits this bill well. The double cab's five-seater layout provides a decent amount of legroom for the rear passengers and seat backs angled at 25 degrees which make a pleasant change from the staunchly upright seating provision found in older double cab pick-ups. The load area is shorter that in the more utilitarian single cab L200s but at 1,470mm in length, can still be described as massive by family 4x4 standards. The problem with the load bay is that it's exposed to the elements but this drawback is easily remedied by the range of load cover options that Mitsubishi can supply. With a full hard-top load cover on the back, the L200 can offer the kind of cavernous carrying capacity you would get in a large estate car with its rear seats folded down - the advantage being that, in the pick-up, you still have room to seat five people. If you have the kind of family which always seems to have assorted bikes, dogs, sporting equipment and other bulky items in tow, the ability to just chuck it all in the back without worrying about folding seats down, removing them completely or muddying upholstery is not to be underestimated.

If you expect the worst combination of roly-poly body control and agricultural engine, the L200 will be a revelation. Pick-ups of old just weren't up to scratch when it came to serving as comfortable family transport but this model is massively superior to those. If you're comparing the L200 to the best driving experiences in the family 4x4 sector, it's still a bit off the pace but when you look at the other advantages the pick-up delivers, it seems churlish to be overly-critical. The L200 has a 2.4-litre turbo diesel engine which is available in 151bhp or 178bhp forms. The model I tried had 178bhp and this seemed adequate for the kind of relaxed cruising around I was doing. The vehicle corners quite stably considering how far it's jacked up on those oversize wheels but it really comes into its own on pot-holed streets and over speed humps. The heavy-duty suspension on the L200 takes this kind of urban obstacle in its stride having been designed to bounce off boulders and ford rivers out in the wilderness. Undulations in the road can set off a bouncing motion in the springs and you can imagine this provoking travel sickness in children on longer journeys. The cabin is very comfortable with a rugged feel to the dash and controls. Everything seems solidly put together and there's nothing obvious that little fingers could pull off, although more storage space would have been nice. The driving position is just like that of a conventional car, except that you're a good two foot higher up. Wind noise is quite prominent at motorway speeds and the engine isn't the most refined diesel out there but it's no more than you would expect from many family offroaders. It's easy to forget that you're at the wheel of a commercial vehicle.

The 'Series 5' L200 range is primarily based around the Double Cab bodystyle I tried, though you can also talk to your dealer about a Single Cab variant - or even a 'Club Cab' model with occasional rear seating. It's the Double Cab version we're focusing on here though, the only bodyshape really targeted for leisure use as well as industrial purposes. In this form, the L200 is priced in the usual £20,000 to £25,000 bracket, figures that of course exclude VAT. I say 'of course' because the fleets and small business who buy nearly all L200s are VAT-exempt, so there's no point in quoting an inclusive total. All models get a 2.4-litre MIVEC diesel engine, but in the entry-level '4Life' variant, it's supplied in de-tuned 151bhp form. Find the extra £1,000 that Mitsubishi asks to trade up to the 'Titan' model and you get the 'full-fat' 178bhp unit paired with the more sophisticated 'Super Select' 4WD system. If you want the option of mating this powerplant to the five-speed automatic gearbox I tried, then you'll need to choose between the two plushest versions, either the 'Warrior' model or the top leather-lined 'Barbarian' variant. In each case, auto transmission is offered at a £1,400 premium.

The L200 Series 5 is a vehicle that can fulfil a number of roles and as such, it's an easy vehicle to live with. From the school run and trips to the shops to motorway journeys, towing a trailer and even serious offroad driving, it can do it all. Perhaps it's not as adept across the board in these situations as some other products but few can do all this with the same carrying capacity as the L200 and fewer still can do it at an equivalent price.