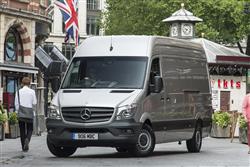 Mercedes-Benz looks to mark the current state of the art in full-sized vans with its well regarded Sprinter range. Jonathan Crouch reports

The Mercedes-Benz Sprinter has long been a byword for excellence and performance in the full-sized van sector. The current range builds on efficiency and safety in significant ways, adds some style inside and out but remains focused on sheer practicality.

With over 2 million vans produced, the Mercedes Sprinter has come to define the large van sector. It's by far the best-selling LCV across Europe, tracing its lineage back to 1995, with a second generation model appearing in 2006. Back in 2014, it was also the world's first van to meet the Euro5 emissions standard, which gave this vehicle an advantage over direct rivals, large van contenders like the Vauxhall Movano/Renault Master design and the Peugeot Boxer/Fiat Ducato/Citroen Relay collaboration, plus of course the Volkswagen Crafter, a model that shares much of its basic design with this one. It's also worth pointing out that the Sprinter was first to introduce a V6 engine to this segment, first to introduce Stop-Start technology to cut costs and is a leader in promoting natural gas power as an alternative. This current model looks to improve on safety and efficiency markedly while introducing ever cleaner diesel powerplants.

Under the bonnet, customers get to choose from versions of Mercedes' doughty 2.1-litre four-cylinder common rail diesel, an engine which has forged a strong good reputation for its combination of performance, economy and refinement and is fitted with balancer shafts to eliminate vibration. The unit comes in four states of tune - with 112, 129, 140 and 163bhp options. We'd avoid the single-stage turbocharger unit used in the base 95bhp derivative and stick with the twin turbo powerlant provided further up the range. Unusually for a van in this sector, there's also a 190bhp V6 diesel option offering a massive 440Nm slug of torque so potent that it must be channelled through a redesigned version of the 6-speed manual gearbox. As an alternative to the diesel engines, the '316 NGT' Sprinter variant comes with a Euro VI-compliant supercharged four-cylinder natural gas engine featuring direct injection. This 1.8-litre engine generates 156bhp. Transmission choice for Sprinter buyers is between a either an 'ECO-Gear' six-speed manual gearbox or a 7G-TRONIC PLUS seven-speed automatic with lock-up clutch, which is the only system of its kind to be found in a van. On the move, handling will as usual depend on the load you're carrying but traction is sure and can be boosted if your business habitually uses off-tarmac tracks, by choosing the 4x4 system that's an option on 313 and 316 CDI derivatives, as well as on 319, 513, 516 and 519 BlueTEC Sprinter models.

Today's Sprinter gets a bold three-slat radiator grille with a distinctive frame around it, giving it a clear Mercedes identity. The angular headlight are also very brand-specific and Sprinter regulars will recognise the high bonnet, the double-segmented tail lights and bumpers which have chiselled lower edges similar to those found on SUVs. The interior feels of better quality than most other large LCVs in this segment, something emphasised by the thick, chunky steering wheel, the classy gear shifter knob and the high quality seat coverings. The air vents are even finished in chrome if the customer opts for a multifunctional steering wheel. The Sprinter is also fitted with a radio system that equips the van not only with state-of-the-art electronic entertainment features and Bluetooth telephone equipment (including a telephone keypad and phonebook), but also the Becker MAP PILOT navigation system.

As you would expect for a van range like the Sprinter, customer choice is virtually limitless, but the van encompasses an approximate price range of between £21,500 and £41,500, which is a little more than what you'd pay for the likes of a Ford Transit, or Vauxhall Movano, but experience has shown that the Sprinter tends to make up for this over its whole life due to better reliability and beefier residuals. In choosing your Sprinter, you've first to decide on your bodystyle. As well as the standard Panel Van, there's also a Traveliner minibus option that can seat up to 17 people, plus the usual Chassis Cab and Dropside options. Here, we're going to assume you want a Panel Van. A choice of Standard, High or Super-High roof heights you might expect but more unusual in this class is the provision of up to four body lengths - Short, Medium, Long and Extra-long. Then, depending upon the kind of use you have in mind, you'll need to decide upon a Gross Vehicle Weight - 3.0, 3.5, 4.6 or 5.0-tonne. The 3.0-tonne models are badged with a number starting '2' - so 210CDI, 213CDI, 216CDI and 219 BlueTEC, depending on your choice of engine. The 3.5-tonne models use a similar structure but have badgework starting '3', the 4.6-tonners start '4' and the 5.0-tonners start '5'. Hopefully, that's not too complicated to grasp. Mercedes' appetite for innovation is apparent in the development of this current version, most notably in the fitment of the sort of safety features that not so very long ago were the preserve of luxury saloons. The Sprinter is available with Crosswind Assist, which is fitted as standard, and COLLISION PREVENTION ASSIST and Blind Spot Assist, which are both optional. Other key safety features are Highbeam Assist and Lane Keeping Assist. On top of the latest safety functions, you also get more commonplace features such as ESP stability control with ASR Acceleration Skid Control on all models, plus ABS with Brake Assist and electronic brakeforce distribution to maximise its effectiveness, a bulb failure indicator and a useful feature that flashes the rear lights to warn following motorists in emergency stop.

The Sprinter founded its reputation on solid practicality and the current model is no exception. The rear doors can be swung through 270-degrees and latched against the sides and the rear door aperture is 1565mm in width, while its height is either 1540 or 1840mm, depending upon your choice of roof height. Ultimate loading capacity does of course depend upon your choice between four body lengths. There's the Short one that has a loadspace length of 2600mm, the Medium version that boosts this to 3265mm and the long or extra long options with their extended overhangs that boost total loadspace length to either 4300mm or an enormous 4700mm. The compact and long options sit on a standard wheelbase of 3,250mm or 3665mm but the lengthiest 'long' or 'extra long' models get an extension between the wheels to 4,325mm. Near vertical interior walls and levelled-off wheelarches mean that you can make the very most of the space on offer. Running costs will depend on your choice between either standard or 'BlueEFFICIENCY' engine options, the latter giving you a stop/start engine system, plus various eco tweaks. As a result, a typical 'BlueEFFICIENCY'-spec Sprinter variant should be able to regularly return around 45mpg on the combined cycle, an impressive reading in this segment. All Sprinter models also come with the ASSYST maintenance calculation system as standard and owners can bank on intervals being as widely spread as 37,000 miles apart, helping cut operator maintenance budgets significantly.

Despite its European success, this Sprinter still isn't one of the first vans that many British business think of when their looking for a really large LCV. Yet on the evidence of this test, perhaps its should be. It's as big and practical as any of its rivals, with a very refined powertrain. Plus, crucially, if you specify your vehicle correctly, you'll be buying into a set of running cost figures that are difficult to better in this segment. Yes of course there are cheaper rivals. Some of them feel a little more avant garde too and have cleverer cabs. But when it comes to the things that actually matter when it comes to running a vehicle of this kind, the Sprinter ticks most of the important boxes with the kind of thoroughness that you'd expect from something bearing the famous Three Pointed Star on its grille. All of which means that whatever your business, this could be your righthand van.