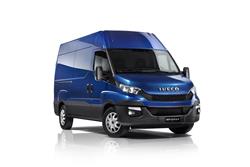 The improved IVECO Daily LCV is now much better equipped to take on tough rivals in the large panel van segment. Jonathan Crouch checks it out

All commercial vehicles claim to be tough and workmanlike, but here's one that can hardly be anything but. The IVECO Daily's heavy commercial ancestry gives it a capable, unbreakable feel that sets it apart in the big Transit-class market for large LCVs. Now that the Italian brand has also matched this with more efficient engines and a smarter, more car-like cabin, the Daily can appeal to a wider cross-section of business buyers than ever before.

Want a job doing properly? Then call in a specialist. It's a maxim that most business people apply to every area of their activities - except when it comes to buying a van. They'll normally select one from a brand primarily focused on selling cars, a maker with technology stretched to also include a few LCVs in its line-up. IVECO has a rather different approach. Not only does the Italian brand only make commercial vehicles but their speciality is in rather large ones. Which means that when a brand like this turns its attention to creating a van, you can expect truck toughness, business focus and a set of wheels purpose-built for the job in hand. You can, in short, expect something like this, the IVECO Daily. And the facts fit the marketing rhetoric. In an LCV market where vans are increasingly car-derived, the Daily's different, with a truck-derived chassis of unrivalled strength, versatility and durability. Which is why it was the first vehicle in its class to offer a load volume of as much as 17.2m3 and a gross vehicle weight as heavy as 7 tonnes. As a result, this Daily may reckon itself to be tougher than its large Transit-class rivals but it's also traditionally been seen as utilitarian and inefficient beneath the bonnet. IVECO takes issue with this and claims to have proved its point by creating a version of this van that's smart as well as strong, tactile as well as tough, frugal as well as fit for purpose. Let's put it to the test.

Truck-like toughness sounds good on the balance sheet, but doesn't hold much appeal if it comes with a van you've to drive long distances in or hurry through a set of twisties on the way to a short notice appointment. So how will this Daily van fare given its truck-tailored underpinnings? Better than I was expecting it to if I'm honest. Thanks to a high seating position and monster wing mirrors, it's an easy van to drive, especially round town where the light steering facilitates a tight 11.5m kerb-to-kerb turning circle (or 12.4m wall-to-wall). And under the bonnet? Well, most Daily customers will opt for the 2.3-litre Multijet II diesel option, offered with either 106, 126 or 146bhp, units pokey enough to put out anything between 270 to 350NM of torque. Enough to tow a braked trailer of between 2800kg and 3500kgs, depending on the variant you choose. Not enough for the job in hand? Then you'll need the 3.0-litre Common Rail diesel, with a choice of 146, 170 or 205bhp, the latter twin turbo unit the most powerful four cylinder diesel on the market putting out a hefty 470NM of torque. There's also a battery-only all-electric model and a clever 'Natural Power' variant. This features a 3.0-litre 136bhp engine tuned for methane power but able to run on ordinary petrol if you need it to. Transmission choice is between five and six-speed manual 'boxes or a 6-speed AGile semi-automatic transmission for urban-based users. Ride quality will depend to a great extent upon your choice between three different suspension systems which can be hung from the rear axle - parabolic, semi-elliptical and air.

The Daily has always been a tough customer. These days though, it's also usefully softer around the edges - or so IVECO hopes. You'd not miss the Italian brand's ownership of this design, emblazoned as it is across the large silver grille strip that dominates the front end, hiding the redesigned radiator that was necessary to house the cooling system required by this improved model's pokier, more sophisticated engines. And inside? Well the interior still can't live with the best panel vans in terms of aesthetics and build quality but the gap to the class leaders has narrowed substantially following a whole series of recent improvements that suggest the Italian brand to be finally getting to grips with the need of drivers, as well as the operators that pay them. As usual with a van of this kind, you sit high up with commanding all-round vision further aided in this case by the huge door mirrors with their useful lower wide-angle section. Despite liberal use of Fiat switchgear and instrumentation around the dash, there's nothing particularly car-like about it but at least everything feels built to last. There's also plenty of storage provision and the steering wheel adjusts for height (though not for reach).

When it comes to panel van purchase, most Daily models retail somewhere in the £25,000 to £35,000 bracket, depending on spec. That's a little more than most rivals will charge, but then you pay for toughness and quality. Panel vans will be our focus here, though as usual with this type of vehicle, a wide range of other body derivatives can be ordered if you want them, including a chassis cab (which can be ordered with a dropside body and space for crew if needed). And minibus derivatives with space for up to fifteen people if required. In choosing your Daily, first you've to decide how heavy your loads are likely to be and then choose your gross vehicle weight from three different classes designated 'L' (Light - under 3.5 tonnes in Gross Vehicle Weight), 'S' (Single Wheel and 3.5 tonnes in weight) and 'C' (Classic - the heavy double-wheel variety with weights of 3.5 tonnes or over). There's a single 2.9-tonne option in the 'L' class, then a 3.5 tonne model in the 'S' class. Beyond that, there are five different GVW options - 3.5, 4.0, 5..0, 6.5 and 7.0 tonnes - in the heavy double-wheeled 'C' class. Payload capacities range from as little as 1,185kg to well over 4,000kg in the heftiest top '70C' model and will have a big impact on which of the three suspension set-ups you order - parabolic, semi-elliptical or air. Beyond that, you've to decide whether you want extra space for crew (catered for by the Crew Van line-up), then select between three body heights, three wheelbases and four veicles lengths that will determine a cargo capacity that can be anything from 7 to 17.2m3. That only leaves manual or AGile automatic transmission, the selection between two or four-wheel drive and a choice between three trim levels.

Most of what you want to load inside should go in quite easily. There's a rear cargo door width of 1540mm and a rear cargo door height that ranges from 1430mm to as much as 1990mm, depending on your choice between three different roof heights. Whichever Daily model you choose, you'll find that it'll give you 1800mm of loadspace width that narrows to 1320mm between the wheelarches in most variants (though in a few derivatives, it can be as little as 1030mm). Enough though for the usual Europallet to slide through. Loadspace length will depend on your selection between three different wheelbases and four different body lengths. Depending on your choice, cargo capacity can be anything from 7.0 to 17.0m3. And if all that space encourages you to carry heavier loads, then you'll need to have selected a model with the right payload capacity - it can be anything from as little as 1,185kg to well over 4,000kg in the heftiest top '70C' variant. If you want to load your cargo in from the side, then there's a standard passenger-side sliding side door. As for ongoing running costs, well if you really want to get these down, then you'll want to look at the methane-fuelled 'Natural Power' model which can also run on petrol when it needs to. Or maybe even one of the clever all-electric versions. I'm assuming though, that most customers will go the more conventional route and choose something from the more conventional 2.3 or the 3.0-litre diesel line-up. Either way here, with a bit of right foot restraint, you should be able to average over 30mpg on a regular basis, thanks to features like a Stop&Start system. As for service intervals, well on the Daily they're set at 25,000 miles and all models get three years unlimited mileage cover as standard.

If you need an ordinary van that can take big loads, there are plenty of LCVs out there that fit the bill. But what if you want something more than that? Something designed just like a fully-fledged heavy commercial vehicle but lighter, more efficient and shaped to compete with the best in the large van market. A serious tool for the serious jobs you have in mind. That's when you'd turn to this IVECO Daily van. In the past, you might have done so, then begun to wonder at the creaky HGV-inspired interior and the rudimentary road manners. But both are issues now fully sorted in this much improved model. Powerful, ecological and reliable, it remains tough enough to make some of its Transit-class rivals seem a little lightweight. It also offers the widest powertrain choice in the market and an unsurpassed load-lugging capacity. But now as well as all that, there's a little more polish, a little more finesse in the more efficient, cost-effective way it goes about its business. There are still, it's true, smarter, sharper-to-drive choices you could make in this segment and if you're an owner-driver, you might be tempted to make them. Well-informed operators though, will find today's Daily a hard van to ignore, so thoroughly designed around their needs has it been. A van from a brand with a total commercial vehicle remit. And a brand that like you, is completely focused on just one thing: getting the job done right.